The World of Little House 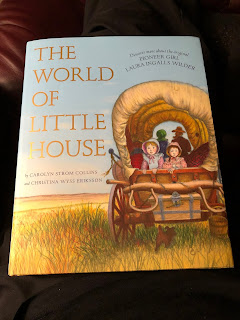 I read this book at the end of January/early February, and will link it to Barbara's wrap-up post at the end of the month for her Laura Ingalls Wilder reading challenge.

This is actually a children's book -  an older child, that is.  But it's also interesting for an adult to read.  It tells many things about the Little Houses that may not be known, and gives interesting additions to the books themselves.  For example, recipes are included for Almanzo's Buckwheat Pancakes (from The Long Winter), and Pulled Molasses Candy (from Farmer Boy). 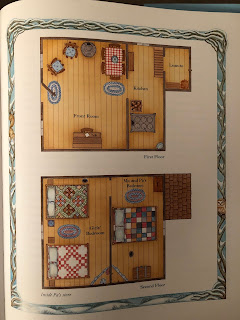 Some of the entries cause this book to seem like many of the other books about Little House that are out there these days - written to capitalize on the popularity of these classic books.  Even though the recipes given above (and others) were interesting, they fall into that category.  They are no doubt just representative recipes of the foods Laura wrote about in the books.  Some of the crafts in the book (for example, how to make name cards) are the same thing - not really from the book, but just representative of the era.

One thing I really did appreciate about the book was the schematic drawings given for each Little House.  They were really informative and showed clearly how tight the living quarters were.  This is Pa's store building that the Ingalls family lived in during the Long Winter, and the following winters in Little Town on the Prairie.

Of course this book did not contain any of the unvarnished truth about Laura's relationship with Rose, or the other unhappy information that has come to light in recent years.  It is a very happy, simple book written for children, but I did enjoy it because of some of the good information in it.
Posted by Ann at 7:07 PM 1 comment:

In early January, I went to a local urgent care because of bronchitis.  The alert physician on duty, who happens to be a friend from church, did some bloodwork because he noticed on my records something unusual from a pre-op exam 16 months ago - a high blood sugar reading at that time.  Later that morning he called me.  "Your blood sugar is high, and you also have a high A1C.  You are a diabetic.  You need to get to your family doctor ASAP."

Four days later my family doctor confirmed what I already knew.  The nurse confirmed it even before the doctor came in the room.  Type II diabetes. The numbers are such that I had to go on oral medicine right away - no possibility of trying to control it by diet first.  The next morning I started a daily routine of checking my fasting blood sugar before eating anything.

Turns out that diabetes is genetic on Dad's side of the family.  I didn't realize how many family members have/had it until this came to light.

I immediately began eating low-carb.  Fortunately, Mike likes to eat low-carb when he is trying to lose weight, so he is 100% supportive.  My numbers have come down somewhat, but after four weeks they are still not where they should be.  I told him a few days ago that I HATE eating low-carb.  His response?  "Well, do you hate diabetes more?"

One thought that helps is knowing that eating low-carb is not a choice.  It is a choice that has been made for me.  I can't cheat "just this once," which, if done just for dieting, merely delays the diet a little bit.  If I cheat, or don't watch this closely, I can lose my vision.  Or kidney function.  Or a limb.  Or develop heart disease.  I could already have damage, as yet unknown, because apparently this has been going on a long time.  (Why someone didn't say something at that pre-op exam, I do not know.)

I'm exercising more, because apparently that stimulates insulin production.  I have lost almost five pounds in the past four weeks.  That's in addition to the 10 pounds that I apparently lost from the diabetes.  (Unexpected weight loss is an early diabetes symptom.  I do not recommend it as a weight-loss plan.)

I've learned a lot about alternate eating.  I read labels incessantly.  The only bread I eat is one piece of rye toast with butter/olive oil blend (no jam) at breakfast.  No more sweets, baked goods, potatoes, rice, or white bread.  I do have an occasional sweet potato.  We eat a lot of eggs, and a lot of salad.  We have learned to like "baked cheese" and have figured out what works in making it, and what doesn't.  (If you're interested, it only works with Sargento ultra-thin cheddar, baked on parchment paper at 250 degrees for half an hour.)  I eat a lot of raw vegetables and dip.  We eat lower-carb vegetables and grilled meat.  We've gone to riced cauliflower.  (And again - we've learned not to buy Green Giant brand.  Pictsweet with onions and edamame tastes much better and has a better texture.)  Today I tried roasted kale, and made candy cane beets from a farmers' market.  I've even learned to like salmon.  Sort of.   I also tried cooking some blueberries in a little water with a little Splenda, then put that over plain low-fat yogurt.  It wasn't ice cream, but it wasn't bad.

It's not easy, and it's not fun.  But it has to be done.  I feel like God kind of slapped me in the face and said "You've had your fun.  Now get disciplined."

I hope that with weight loss and proper eating, I may be able to control the symptoms and get off medicine.  That's my prayer.
Posted by Ann at 7:29 PM 2 comments: