This video was taken by Andrew's friend's girlfriend when they brought him home and surprised us on Christmas Eve.  Of course, this all went down as I was washing my hair in the sink, which explains the towel on my head.  Mary Lee is in the background doing another video.
Posted by Ann at 9:32 AM 1 comment: 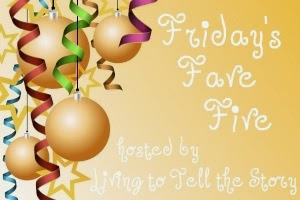 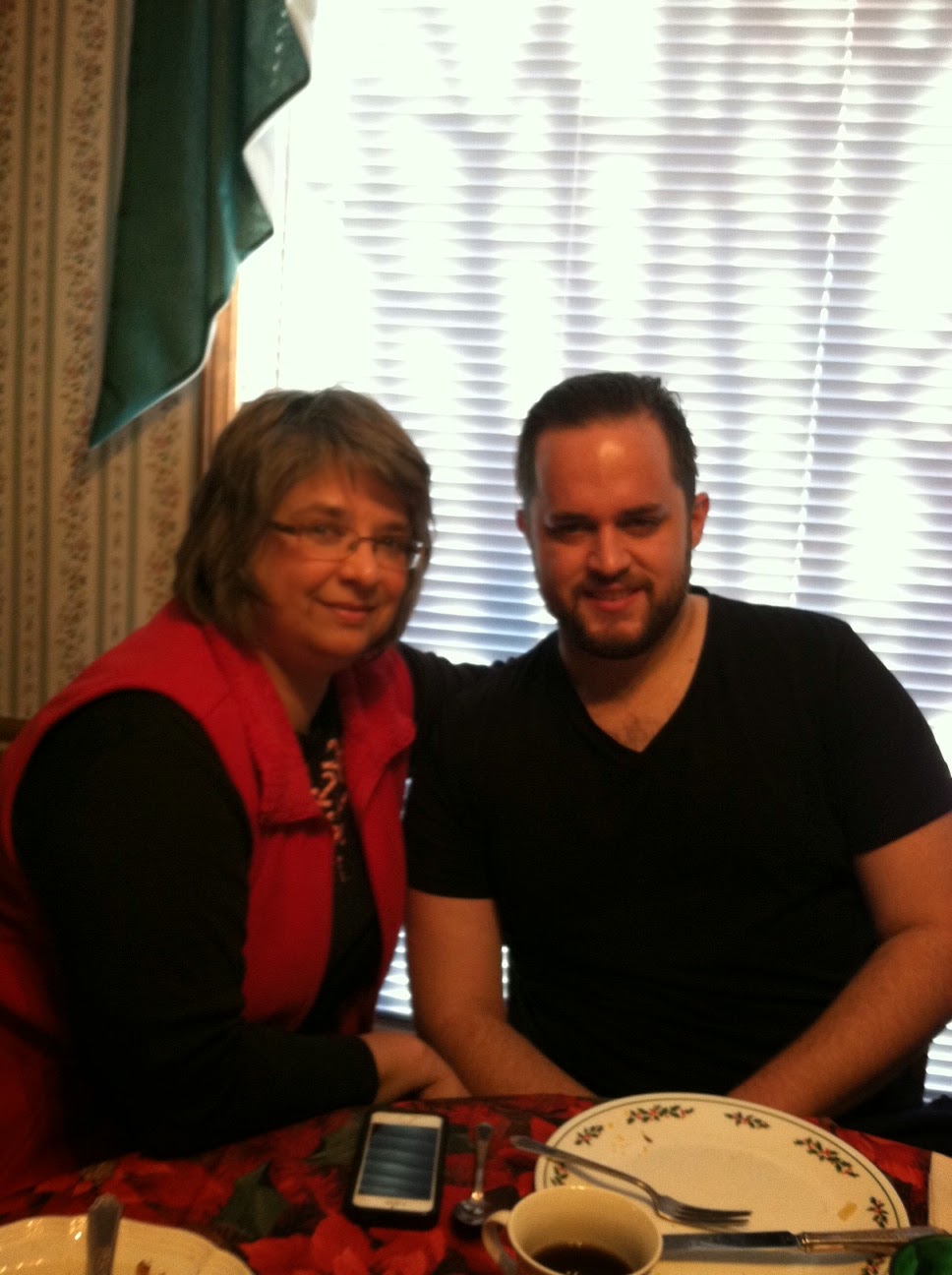 1. This was the surprise of the year.  We were not expecting Andrew home until January 4.  He told his mom a LIE.  He said his ticket to leave China was on January 3, knowing full well that it was for December 23.

However, we will forgive him.  :-) He said other than that one lie, when I had put him on the spot about the date of his ticket, he was able to pull the whole thing off without any more untruths.

Originally, he really was not going to be able to get home until early January.  But the last exam he was to give was to a class of graduates, most of whom were already leaving to take jobs in other parts of the country.  When he realized this, he went to his boss, who was willing to let him give the exams early to all the students.  (It was a small class.)  So around Thanksgiving, when he realized it would work out to get home for Christmas, he started to put his plan into action.

2.  Thankful for the part that several other people had in pulling this off.  His sister ML has been in on it for a month; she had lunch with him in Greenville on Christmas Eve before he came home in the afternoon.  His friend Bill picked him up in Charlotte.  His friend Bryon and girlfriend Tessie brought him to our hometown.  And apparently a number of people knew about this in advance.  A number of people other than us!  Here is a link to the video of the surprise.

3. A nice Christmas day.  We didn't have a lot of presents this year.  The kids got cash.  My present was a ticket to China last summer.  (Mike is off the hook for several holidays because of that one.)  My gift to Mike was the hunting trip he took in November.  Mary Lee gave very nice gifts, and Andrew brought pearls from China.   That was about it.  But it was a nice quiet day, and I made our usual shrimp creole for supper.  We had breakfast with my folks, and they and my sister Rhoda stopped in after supper also.  And then I went to bed while the others were up for awhile.  :-)

4. Last Friday (the last day of school), we took the students to a couple of assisted living facilities and had them sing for the residents as well as take cards to them that the elementary students had made.  At first the students were mildly resistant to this.  But it was a joy to watch them, on the first time around the halls, being a little nervous; then, by the second go-round, they were stopping in groups in residents' rooms, delivering cards, talking, and even singing.  What was really good to see was some of our young men taking the leadership in this endeavor.

5. I ordered a new cord for my elliptical off of eBay, hoping it would work to turn the thing on again.  It came this week, and it works!!  I am glad to be able to get back on it.  I really need to, for the sake of my knee, which needs strengthening. 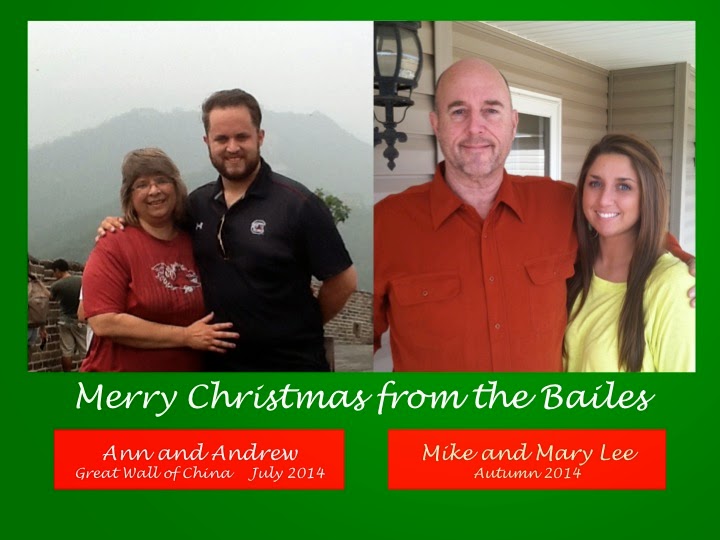 December 2014 – From the Bailes
Mike  FINALLY GOT THAT DAY SHIFT JOB he’s been wanting for a long time.  He still gets pulled to the control room often, but at least he’s working Monday-Thursday most of the time, and NO NIGHT SHIFT.   He got an unexpected Canada trip in November, which he loves to do once in awhile.  He is a great husband, a great provider, and a great dad!!

Andrew IS COMING HOME IN EARLY JANUARY for a five-week break.  He’ll probably make a decision about a third year in China at that time.  Hard to believe that he will miss Christmas for the second year in a row, but he will not be done teaching until too late to get home.  His opportunities have been abundant, and teaching there has been a great and stretching experience for him.

and  finally, I  GOT TO VISIT ANDREW IN CHINA last summer!  It was the trip of a lifetime.  I spent two weeks with him in his city, three days in Beijing, and a couple of days in travel.  Being in a totally foreign culture was my own great experience.  So glad I got to go!!

Grateful for family and friends, and grateful for the gift of Jesus Christ!!
Posted by Ann at 7:46 AM 1 comment:

Today was supposed to be really nice and simple - vocabulary exams in four of five classes should make for a quiet day.  However:

--1st period - students working well when an unexpected fire alarm goes off, and we spend ten minutes outside in the middle of class.  Turns out the alarms were being tested, but no one remembered to inform the high school that we could ignore the beeping.  So, the class was late for chapel (2nd period) so they could finish their exam.

--3rd period - Exams passed out; they work for about ten minutes when someone says "I think you gave us the eighth grade exam."  (This was the ninth grade.)  They were right.  Why couldn't someone have said something right away?  So exams were unusable for either grade because they'd been written on.  I replaced with the proper ones, but we'll have to do the spelling part tomorrow as they ran out of time.

--4th period - Seniors were late because chapel ran long, which caused their calculus exam to start late.  It was a very long one, so they were thus very late to my class.  I had to keep them over from my class also.  Fortunately their 5th period class wasn't critical and they could be late.

The rest of the day was a little simpler.  A former student came by and ended up talking to the juniors last period.  Always nice to see a former student who has matured and has a sense of what God has for his life.

But the morning was crazy!!
Posted by Ann at 9:03 PM No comments:

I was given a beautiful gift this morning.  Two students at our school are the grandchildren of a couple who knew my mother-in-law at church.  At the school play, I was talking with the lady, and she said she thought she had a picture somewhere of my mother-in-law.  I told her if she ever found it, I would love to see it.

This morning, her granddaughter brought me a Christmas card, with this message, and a paper copy of the attached photo.

This picture is a treasure to me, particularly because I never knew her. 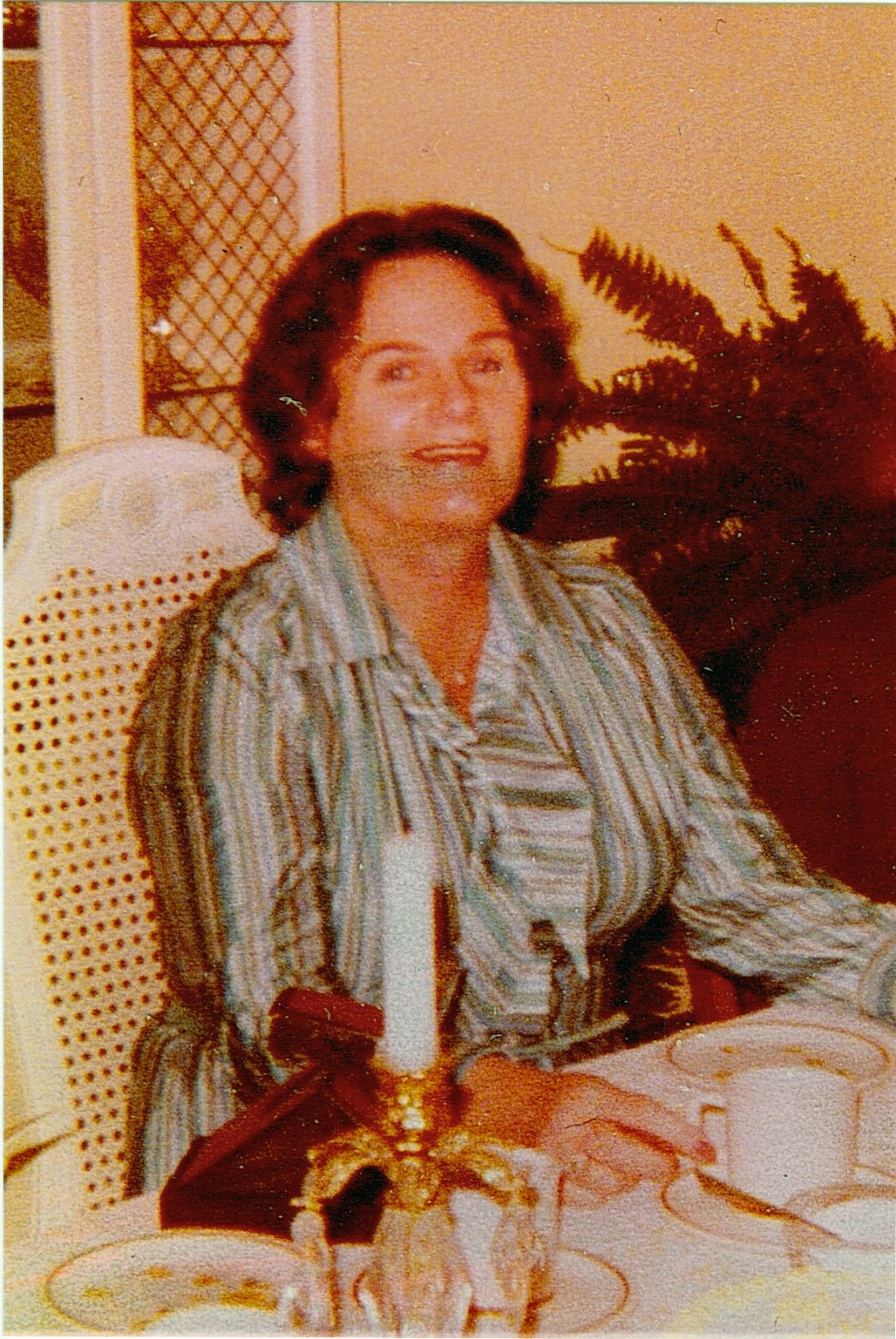