Two notes needed ahead of time:

Well, this lady podiatrist examines Andrew and gives him instructions about how to treat his feet. (It's especially important since he's going on the drama team starting in one week.) She looks at his shoes, then at Andrew, and in a voice worthy of a schoolteacher, announces, "Those shoes have NO support." Andrew sort of stammers out an answer about the shoes being a Christmas present, and they're casual shoes, and. . .

And then she continues, "And you're not wearing socks!" The look on her face combined the best features of a schoolteacher and a mother. Plus, she was looking down her nose while wearing reading glasses. The look on Andrew's face was the guiltiest I have ever seen on him.

He tried to explain that those shoes aren't worn with socks, but somehow the explanation got lost in the guilt. As she looked tartly at him, and he tried to explain, his explanation was lost as she briskly commanded, "Get some Lysol and spray those shoes," and all he could do was weakly say "Yes ma'am." It was a Kodak moment for a mother to watch.

. . .take down the tree.
. . .put up all the painted ornaments. (I wish I'd put a year on all of them as I did them.)
. . .put up all the angels and rocking horses.
. . .get rid of all the sweets (mostly already done - we took them to my folks.)
. . .put up all the odds and ends like reusable boxes.
. . .make a shopping trip (something I do not like to do) for at least a few new things to wear this winter.
. . .return the cloth manger scene to the box. (This doesn't elicit the attention it used to when the kids played with it, but if I were not to put it up one year, I'd hear about it.)
. . .clean out drawers and try to get ahead on the house before the new semester starts.
. . .go to the gym (Christmas has been too good to me).
. . .get some rest.
Posted by Ann at 8:43 AM 2 comments:

A Christmas Shout-Out to Stan and Kathryn

As part of this Christmas season, I would like to pay tribute to a lovely young couple, Stan and Kathryn, who are special to me. I taught both of them, Stan for four subjects and Kathryn for two (she came to our school in the 11th grade). But, even more special than that - Stan first laid eyes on Kathryn in my Junior English class and probably had a few thoughts of marriage even in those first few minutes! It's been fun to follow their lives on their blog, The Jordans' Journey.

But, for a young couple happily in love, they will not be together this Christmas. Stan is serving us in Iraq, while Kathryn holds the fort down here in the States. I'm sure she has her moments, but her blog entries display a positive mental attitude and approach to this difficult time in their lives.

I wrote to her, around the time Stan deployed (about a month or six weeks ago), and reminded her of a couple of lines in a poem that we read in senior English, titled "To Lucasta, Going to the Wars," by Richard Lovelace,
-
"I could not love thee, Dear, so much,
-
Loved I not Honour more."
-
(Now, without saying too much, let me mention that I'm sure Stan does not remember this, as British Literature was, to put it mildly, not his favorite subject.) :-)
-
But I think of this young couple, and did when teaching this poem a few weeks ago, as personifying the meaning of these lines of poetry. I am grateful for Stan and Kathryn, and their acceptance of the hardship of separation, because of their love of the honor of our country. Their sacrifice is helping to keep all of us safer.
Posted by Ann at 4:13 PM 1 comment:

This morning before church, a little five-year-old boy was waxing eloquent about something to his mother, and she and I were chuckling about how five-year-olds think they have all the answers.

Then in church, we sang "O Come, All Ye Faithful," and I couldn't help but remember another five-year-old boy who loved Christmas carols and who would sing at the top of his lungs, "Joyful and Trionic!" He was adamant that that was right. Nothing we said could convince him otherwise. So he happily "joyful and trionic-ed" his way through the Christmas season. I think God must have been pleased.
Posted by Ann at 1:03 PM 3 comments: 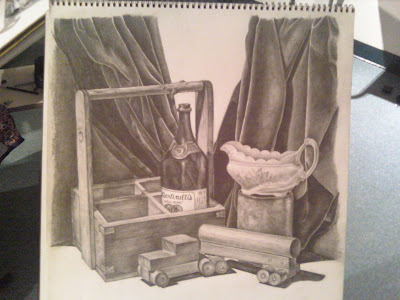 This is a photo of my daughter's final piece for her drawing class. It took her 23 hours. I am immensely proud of her!
Posted by Ann at 8:56 PM 5 comments:

When you have a near-Christmas birthday you learn early in life that it often gets overshadowed, particularly in a school situation. People are thinking about Christmas parties, programs, shopping, etc. That's just the way it is and you learn to live with it.

Therefore it was a nice surprise when my sponsor class, the juniors, pulled one over on me today, and brought to sponsor time a wonderful strawberry cream cake (from the Sweetery, which any local knows is the top bakery around here), a Willow Tree figurine, and a very nice signed card. I have that group for two classes before sponsor time, and not one of them let it slip that they knew it was my birthday. I figured they forgot or didn't realize it. But they didn't, and I very much enjoyed the little party.
Posted by Ann at 8:10 PM 4 comments: 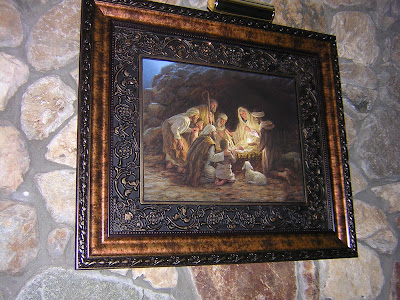 A couple of weeks ago I was taken by a print in Hobby Lobby. Now, usually, decorating pieces don't do great things for me, but this was different. I thought it was a beautiful Christmas print and the framing was just as beautiful. It was half price. Mike came to look at it and he agreed, so we bought it and agreed to give it to each other for our birthdays.

We brought it home and hung it up on the stone chimney. The size is perfect. However - this is a dark room, and the beauty was lost in the dimness. There really wasn't any other wall where it would look right. So Mike looked into those little lamps that hang over a picture. On eBay they were about $60. More than the picture itself! He checked at lighting places here in town. They'd have to order them. He called Home Depot. $15. Getting more in what we wanted to spend. So he tried Lowe's - $15 there also, but they had several on clearance - for $1.65! Not bad!
I tried to take a photo of the print and the Christmas tree together, but it didn't turn out nearly as well as the photo of just the print. But I'll post this one also.
- 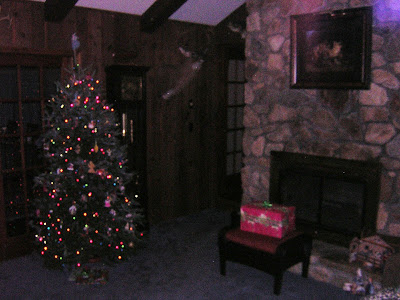 I just tried to make a collage on Paint. Let's see if it worked: 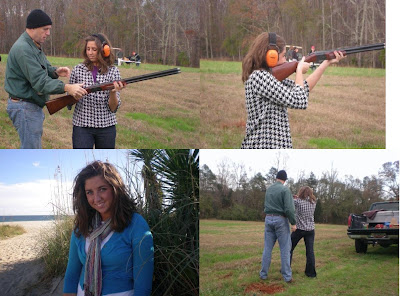 Yep, it did! Three of the pictures are Mike and ML shooting skeet at Steve's house on Thanksgiving day, and the lower left is of her when she went with her friend to eastern North Carolina. I love that picture of her.

One Expensive Pair of Roller Skates

ML comes home tomorrow night, for a pre-op on Wednesday, for her wrist surgery which she will have when the semester is over. She has a ganglion cyst on her wrist, which is at the site of her fracture when she was in the seventh grade. Which was the result of the purchase of a $1.00 pair of roller skates at a yard sale. That has turned into one expensive pair of roller skates.

I will make porcupine meatballs for Mike's birthday celebration, which we're holding off until tomorrow night since ML is coming home. That is his favorite - his mom always made that for his birthday when he was a child.
Posted by Ann at 6:35 PM 3 comments:

Well, I don't really have anything fascinating to post, but it's been quite awhile since I put something on here. Often I have ideas for thoughts to put on here, but it's always at a time when I can't get to the computer. And by the time I do get online. . .the thought has disappeared.

--Sitting here with Mike watching Alabama decimate Florida. I know they are absolutely screaming over there.

--Bought a tree today and I'm about half done decorating it. I fell asleep mid-afternoon (it's been a kinda rough week physically) and am in no rush to overexert myself.

--Been back at the Y for a couple of weeks. It's interesting how that can get a little addictive after awhile. You really miss it once you're in the routine of going. I start on the elliptical (to get it over with) and then get on the treadmill. If I leave school immediately when allowed to go (3:40), changing in my room first, and go straight to the Y, I can get in ahead of the late afternoon crowd. I have to fight traffic coming home, but you can't have everything.

--ML comes home for a pre-op next week for her surgery on the ganglion cyst on her wrist. When the semester is over, she has to go straight to the hospital from college! Andrew will probably take her right there as it is actually on the way home. It will depend on the exact time of the surgery, which she'll find out next week. It will be kinda nice to have her home on a weeknight.

--And finally, Mike celebrates his Heinz birthday on Monday. You figure it out. :-)
Posted by Ann at 7:33 PM 2 comments: