Volleyball and a Nice Sunday Night 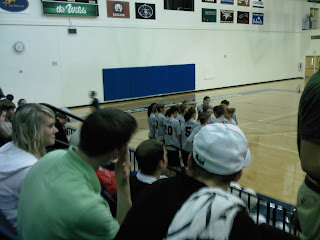 We went to watch ML play volleyball last night. She's starting as a freshman for her society, which is competitive in volleyball, and it was fun to see her doing well at the next level of competition. Unfortunately, I forgot to take in the good camera, so these are just taken from my phone, and you can't really see much. She's at the left of the huddle in the above picture. 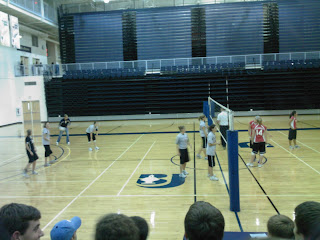 And this one is a little blurry - the phone camera was always a little delayed no matter how much I tried to get a good picture. She is at the net, further away from the camera than the other girl. You can see it much better by clicking on it, but even then it wasn't a very good shot. Maybe some other time.
-
Both of them have come home for the evening. They'll spend the night and go back in the morning in time for 9:00 classes. It's nice to have them home - Andrew and I took a long walk, and ML is in her room getting her schoolwork done. She's always been a diligent student. We had homecoming at church this morning, and a dinner (they got here just in time to get a plate of food), so we didn't have church tonight. Therefore we're all home and enjoying the peace and quiet. Hard to believe they've been gone for a month.
Posted by Ann at 8:10 PM 1 comment:

I've never been neat. Not a slob, just not OCD neat. I like my "piles" - they are my own form of organization. Besides, why put something away if you're going to need it again in a few days? Since opposites attract, I married an OCD man. Fortunately we have both moderated somewhat in the last 24 years. He knows I can't live in a museum, and I know he needs order. Anyone who's ever visited our home knows it's not perfect, but you also don't walk out of here thinking that it's a mess either. Somewhere inbetween. Lived in.

So explain why I can't leave the grocery store parking lot without making sure that the grocery carts are neatly in the corral, pushed into each other and in a straight line?
Posted by Ann at 12:14 PM 1 comment:

It's play time again. I'm directing MEET ME IN ST. LOUIS. The good thing about the whole process: A number of these students have been with me for four years now - they're seniors now - and they don't actually need a lot of directing. Even in the early practices, we're having so much fun! I plan to take some pictures next week and will post some - as well as put some up on the wall at school to create interest.

I'm a reluctant director but, even so, once we're in it I do enjoy it. It's also nice to have an actor son who helped pick out a good play for this group of students and to whom I can turn with questions.
Posted by Ann at 6:55 PM No comments:

This is a very good analysis of the travesty of assigning "racism" to the motivation behind many American people's opposition to the health care bill.
Posted by Ann at 9:21 PM 1 comment: 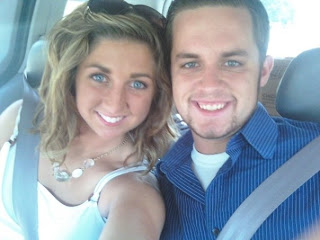 I'm not really sure where this picture came from, but just found it on my hard drive, and think it's a nice and fairly recent picture of my beloved children.
Posted by Ann at 1:16 PM 3 comments:

My sister came to visit for a few hours with her good friend last week as they passed through the area. She brought me, along with cherry jam and zucchini bread, some bell peppers and onions from their garden. Which reminded me of fajitas. I don't make them very often, but once in awhile, if I have the stuff on hand, they are so good to make. My sister-in-law Ginny taught me how to make these, back in the early '90s. 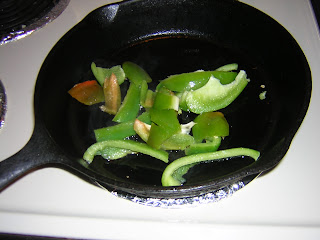 Chop up the peppers and start sauteing them in a small amount of oil. 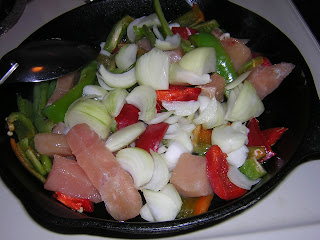 Add the onions and chicken, and continue sauteing until the chicken is browned. 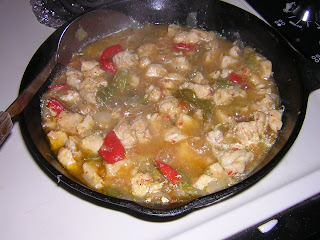 Add water and an envelope of Italian seasoning mix (Yes, Italian, not Mexican), put a lid on it for awhile and then take it off for awhile, and cook it down for an hour or more until the peppers and onions are basically "mush." 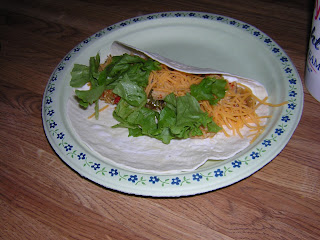 Warm a tortilla, spread it with sour cream, put the cooked mixture on it, sprinkle with cheese and a little lettuce. Oh, it is so good.
Posted by Ann at 7:29 PM 1 comment:

One of our new administrator's new ideas is to have class meetings once a month, led by the class officers. They have to come up with an agenda the week ahead of the meeting, approved by both the class sponsor and him. Today was our first class meeting, and my juniors came through with flying colors. It was a blessing to watch the song leader read the history of the song "The Solid Rock" and then lead the class in all four stanzas of singing it, followed by the chaplain giving a devotional on Christ our Rock. They conducted the class business well, then had three games/activities ready.

Right beforehand, the president and chaplain came up to me in a bit of a panic - "We forgot to bring blindfolds for the activity! Do you have anything we can use?" I did know of one possibility, but having been told to let them handle it, I decided not to intervene. Well, they thought of something - they got two hoodies, and had the two people who needed to be blindfolded put the hoodies on backwards. Problem solved - and they did it themselves.

Class meetings were a huge success. I love new ideas that work.
Posted by Ann at 9:05 PM No comments:

This is my 30th year of teaching school. Hard to believe - that is the record of an OLD person. But it's true, like it or not. Seven of those years, when the children were little, were just part-time, so on an "official" record, each of those would appear as a half-year of experience. But, in terms of time put in, it's been 30 years.

At BJJH, I added approximately 100 students each year to the total of how many I taught. Here, it's a little different - my yearly student load is approximately the same; however, the same students pass through my room several times between eighth and twelfth grades. I'd say the total number of students I've taught is around 1600, with about a fourth of them being taught anywhere between 2 and 5 times due to different courses in different years.

There are several areas that I would be happy never to teach again. Weather, the sun, asteroids and meteors, William Wordsworth, early American literature, persuasive speeches - those are a few topics that are just not that interesting any more.

But there are others that I love. For example:

EARTH SCIENCE - Hands down, constellations and stars. I could teach those every autumn to somebody, forever. There is something very rewarding about seeing youngsters come in every morning and say "I figured out where the Pleiades is!" Or the Big Dipper, or Cassiopeia, or the Northern Cross, or any number of other constellations. I tell them that that is lifetime knowledge - the kind of learning that they will teach their own children someday while going camping or being out in their back yard. Furthermore, it's fun to teach them about nebula, star clusters, and other deep space objects. It is completely new learning for eighth graders, so they are very interested. And they can gain a new appreciation for the greatness of creation.

CHEMISTRY - Probably the mole concept (when they get it). And especially organic chemistry. I'm not the best of chemistry teachers due to not being very mathematical. Organic is not mathematical at all!

BRITISH LIT - Chaucer and Shakespeare. HAMLET and MACBETH are layered with so much to learn, layers of complexity and wisdom, that even after eight years I still find more.

BOTH UPPER LEVEL ENGLISHES: Objectionable Elements in Literature. It's very rewarding to teach students how to have discernment in what they read or watch. I remember Andrew coming home after the first day of this discussion, shaking his head, and saying "That's nothing like any English class I've ever had before."
Also, I love watching their writing skills improve from the start of their junior year until they graduate.

Well, the more one learns (in order to teach, especially), the more one realizes she has to learn. But it has been a privilege thus far, to at least attempt to communicate knowledge and discernment to young people, in a Christian atmosphere.
Posted by Ann at 6:35 AM 5 comments:

I was attempting to explain to my eighth grade science students why ancient people spent a lot of time on the roofs of their homes at night, studying the stars and the sky. I said "Remember, they didn't have TV to watch." Then, in an attempt to include electronic games in the explanation, I said "Nor could they take to the roof their. . .and I accidently combined the two words "playstations" and "gameboys." I suspect I was the subject of some conversation at more than one supper table last night.
Posted by Ann at 6:38 AM 6 comments: