UP - had a nice weekend with Mike's cousin Jenny. Pictures later.

UP - half days this week (achievement tests). Really nice.

DOWN - My daughter leaves for a trip with her friend for a trip Thursday and will be gone several days. I'll miss her. She's going to college next year and I'm getting sad already.

UP - We went to Homecoming at Mike's old church Sunday and it was nice to see old friends again.

UP - Our drought is now only severe! (down from exceptional and extreme, both worse categories).
Posted by Ann at 4:51 PM 1 comment:

In yesterday's paper was an article about a 33-year-old man who killed a cop fifteen years ago, who is now petitioning for a change in his sentence. The article said the man is "applying for payroll." Who in the world edits these things! If the error is something that can get by spell check, the writers don't catch the mistakes - and there are errors every day. Somebody told me that the copyediting is outsourced to India. I believe it. It's enough to make me cancel my subscription.
Posted by Ann at 7:27 AM 1 comment:

This is my choric speaking group as they performed last week in Columbia. I was so proud of them and their hard work - also the duet acting team that is not pictured here. I'm not really sure that pictures were supposed to be taken, but since a student did, I'm taking advantage of it! 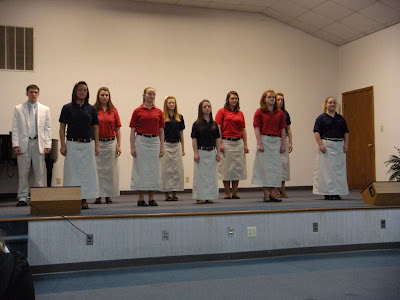 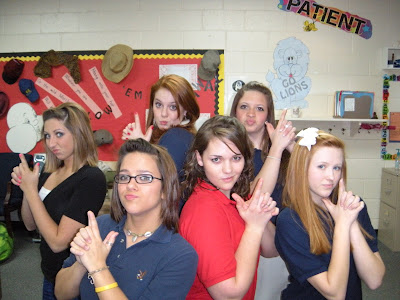 This is how high school girls act who have too much time on their hands while waiting for their performances!
Posted by Ann at 2:24 PM 1 comment:

UP - Last night was the last PTO meeting EVER! (Next year we go to parent-teacher conferences in the afternoon.)

UP - We had a nice family gathering for my mom's 80th birthday this weekend.

DOWN - Today is my daughter's last home game of any sport at our school. Makes me sad. I can't tell how many games - in the hundreds - I've watched her in, what with volleyball, basketball, and soccer, for the past six years.

UP - She bought a team T-shirt for me to wear. Without my knowledge she bought a size smaller than I usually wear. It fits!

DOWN - We have a leak in the pool. Mike has his work cut out for him to figure out where it is. If it's under the concrete - we won't even think about that.

UP - I don't want to end on a down. God has blessed me greatly - and I'm not talking about material things. His love and security are the greatest blessings of life.
Posted by Ann at 12:37 PM 1 comment: 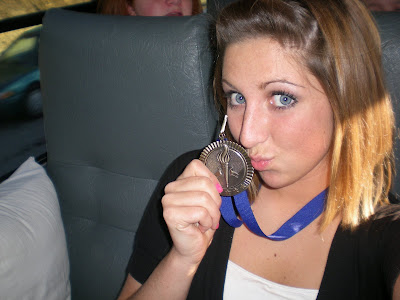 The girls' soccer team got to play their game today. There was about a 2-hour window with no rain - time to get the game in with a team that had traveled about two hours to get here. And the girls were disappointed - that they didn't get to play in the rain! They streaked their faces with mud, I guess as a spirit thing.

They won 4-1. My daughter talked the coach into letting her play forward for awhile (she's usually on defense) and kicked one of the goals!
Posted by Ann at 9:37 PM 1 comment:

Mary Lee and two of her friends had to form a "corporation" for their economics class project. One of the things they have to accomplish is to make a commercial for their company, not longer than one minute. Here is the result: 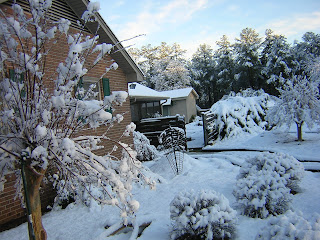 View from the side of the house this morning. 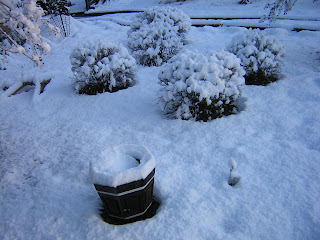 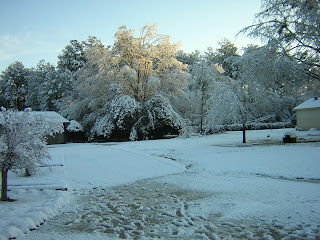 It's just so unusual and so beautiful to see snow covering everything. 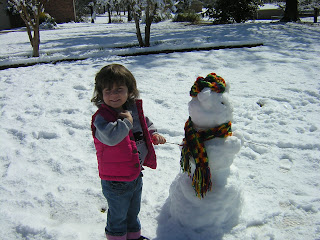 My daughter's friend was coming home from work last night and couldn't get home, so she stopped here and spent the night. The two of them made a "snow bear" - this is a side view, with her friend's little sister, who was here with her mom this morning to pick the friend up (in case the problem was with the brakes on her car instead of just an inability to drive on snow and ice).

This morning the two girls walked back in the woods and found the old beaver dam covered with snow. Ginger went along and went crazy - the girls think there was a beaver actually in the dam.

The snow is almost melted now. It was a fun twenty four hours.
Posted by Ann at 5:21 PM 2 comments:

I have more pictures to post and will do so later today.
Three inches total, and it was beautiful coming down.  It's also melting quickly today.
Andrew is on his way home from New York and is riding through the same storm today.  As of 9 a.m., in New Jersey/Pennsylvania, he said it wasn't too bad.  Up there he saw over a foot of snow for the first time in his life.
The power blinked a couple of times, was off for about ten seconds once, but then remained on.  We did lose phone service for about 18 hours, and the cable is still out.  That is probably not a bad thing.  And knowing what the cable company's service has been like in the past, I would not be surprised if the cable remains out for several days.
It is so beautiful to look at.  We get snow about once a year, but often just a dusting and often just an ice event.  So to get a big, real, covers-everything snow event is a real treat.  We can appreciate it much more than those Yankees who get sick of snow.
Posted by Ann at 2:15 PM No comments:

Oh, it is so beautiful! No school tomorrow! 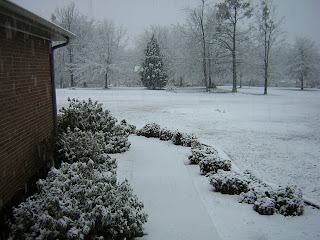 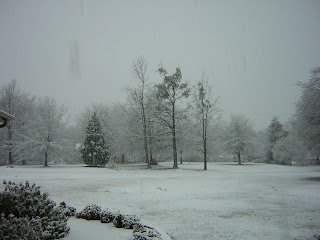 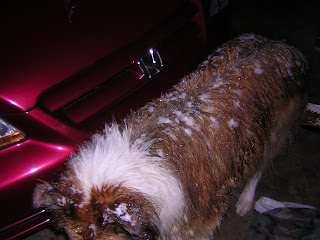 It's very hard to get a picture of Ginger because she HATES it, but she loves going out in the snow herself. She doesn't even seem to realize that she shouldn't like getting cold and wet.
Posted by Ann at 6:03 PM No comments: