Things I Learned in the Winter Storm

We had about 36 hours of enforced togetherness/cabin-fever during last week's winter weather event. I learned much about many different things.  Here, in no particular order, is the list: 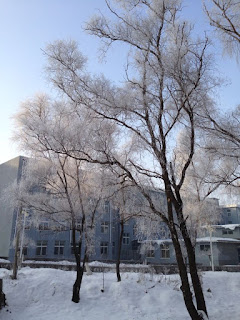 
1. A snow day today!!  Always a treat.  Throughout all the forecasts of the past couple of days, we have been right on the border of the line between frozen precipitation and cold rain.  So I cautioned the students not to be surprised if we did have school today.  I thought it would be more of a situation of coming in and then being dismissed early.  So it was a pleasant surprise, after my alarm went off at 5:40, to see our school name come up on the local news website, and then get a phone message five minutes later as well, saying that we were CLOSED today. 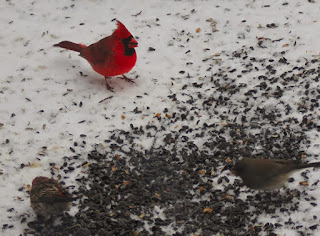 2. Mike's training test for work was postponed, so he was home most of the day also.  (He didn't find out until he drove 45 minutes to the training center at work.  Naturally. . . .)  He went outside and cleaned up all the feeders and refilled them, as well as pruned the bush that was right in front of the picture window, so that we could see all the birds that were feasting at the sunflower and suet feeders.  We had quite the day at the feeders - at least 15 species made their way to our "banquet."  One was a first for the year, and there was also one mysterious bird that we couldn't quite identify.  It looked like a female purple finch, but we haven't had one of those here for years, so I'm hesitant to say that that is what it was.

3. A new twist on banana bread.  :-)  I only had one banana but the recipe called for two.  So I added a half a cup of orange juice and used orange flavoring instead of vanilla.  It was deliciously moist and deliciously flavorful!

4. Wednesday night I had nursery duty at church.  Only one little girl was there (we had bad weather then also), and she appeared to be "wide open."  I anticipated an hour of chasing her around as she crawled all over the nursery carpet.  But she came right to me, sat in my lap as I looked at a book with her, and I could feel her relaxing.  Sure enough, she dropped off into a 45-minute nap while seated in my lap.  It was so pleasant to hold a sleeping 10-month-old, sucking her thumb, that what could have been a "one more thing to do this week" experience turned into a sweet and restful hour.

5. A warm and dry house during a snow/ice/freezing rain weather event.  Perhaps we all need to stop and be more thankful for that.  Meanwhile, I am very much enjoying the enforced break at home!
Posted by Ann at 7:01 PM 7 comments: 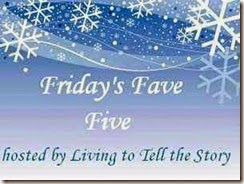 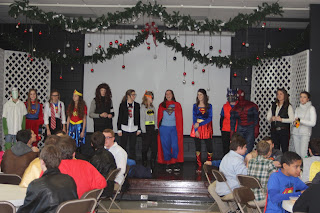 1. Great spirit week and homecoming last week.  I don't have any pictures on here of the homecoming, but it was the best we've ever had.  We tried having alumni games instead of interscholastic ones, and it really worked.  We had more graduates than ever to return.  Now to make it even better next year.

This pic is of the students who won on "superheroes" day for spirit week.

2. Wewalka pizza dough.  My family never liked my homemade pizza.  They said the crust (the canned pizza dough from the refrigerator section of the grocery) wasn't good.  A couple of weeks ago I noticed that our grocery was carrying something new - a pizza dough that was rolled up on parchment paper.  I tried it at the end of last week, and we loved it.  So much better than the other, and easier too - all you do is unroll the parchment paper.   They also have croissant dough and puff pastry.  The website said it is a new import to the U.S. from a European bakery.  I will make pizza more often now, and maybe will try some of their other products also.

3. Navy bean soup from my mom for our supper on a cold winter day.  Kept me from having to make salads or rustle up something else to eat.  Thank you.

4. We had a fun night sitting up late to watch the National Championship Football game.  It was too late to have company or go anywhere, but it was a great game, and fun to watch.  And I slept surprisingly well, having gone to bed so late, so didn't feel too many aftereffects the next day.

5. Exams are over, a new semester has started, and though I have to be at school Monday for parent-teacher conferences, students don't come back until Tuesday.  So it's essentially a three-day weekend, and it should be a quiet one.  Always nice!

"If You Give a Mom a Muffin"

I saw this today and wish it were an original.  So clever!!  Brings back a lot of memories also.
----------------------------------------
If You Give A Mom A Muffin
by Beth Brubaker
If you give a mom a muffin,
she’ll want a cup of coffee to go with it.
She’ll pour herself some.
Her three year-old will come and spill the coffee.
Mom will wipe it up.
Wiping the floor, she will find dirty socks.
She’ll remember she has to do laundry.
When she puts the laundry into the washer,
she’ll trip over shoes and bump into the freezer.
Bumping into the freezer will remind her she has to plan supper.
She will get out a pound of hamburger.
She’ll look for her cookbook
(How to Make 101 Things With a Pound of Hamburger.)
The cookbook is sitting under a pile of mail.
She will see the phone bill, which is due tomorrow.
She will look for her checkbook.
The checkbook is in her purse,
which is being dumped out by her two year-old.
Then she’ll smell something funny.
She’ll change the two year-old.
While she is changing the two year-old, the phone will ring.
Her five year-old will answer and hang up.
She’ll remember she was supposed to phone a friend
to come over for coffee.
Thinking of coffee will remind her that she was going to have a cup.
She will pour herself some more.
And chances are,
if she has a cup a coffee,
her kids will have eaten the muffin that went with it.
Posted by Ann at 9:43 PM 1 comment: