I read eighth grade book reports this week, and was told that a girl "works in a hair saloon."  Another student told me that she would "defiantly recommend this book to her friends."  I wonder how that will go over with them!
Posted by Ann at 10:14 PM 2 comments:

Yes, they really are silkworms, and yes, Andrew really did try them.  He said a couple of the other teachers also tried them, but most of them just couldn't stomach the thought. 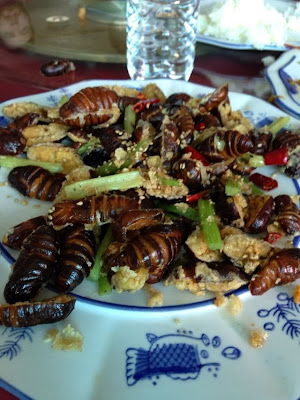 I can never again tease him about being a picky eater when he was a kid.  He has completely redeemed himself. 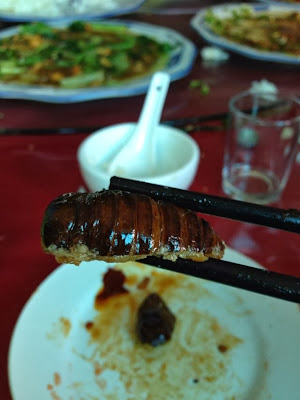 One morning he called me from class with a question, and then sent this picture of the students.  I told them all hello on WeChat, but since it was 6 a.m. our time, did not send a picture back.  I told them that I don't do pictures that early in the morning, and they thought that was funny. 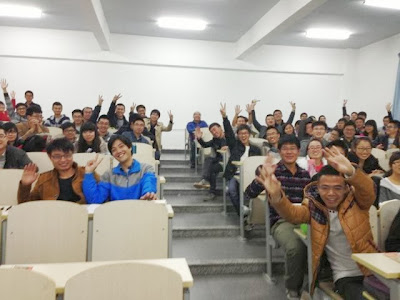 In other China news, Andrew did a full concert last week at a coffeehouse where he's been taking his guitar and singing from time to time.  Apparently they even sold tickets; they sold out, and so many wanted to hear it that he is repeating the concert next weekend!  I am not surprised that he's found a way to sing.  He'd rather do that than eat.

These are three of his graduate students, who presented him flowers after the concert. 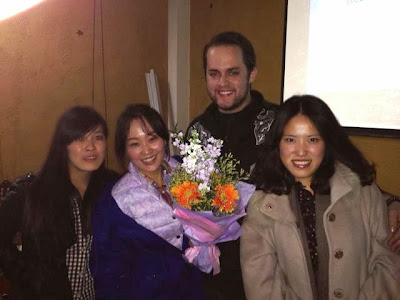 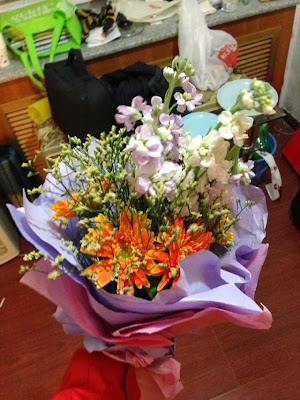 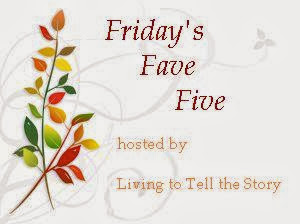 1. I am almost finished crocheting this scarf for my son in China.  He is in an area that gets very cold in the winter, so I think he'll appreciate it.  And the camo colors should be masculine enough.  As soon as he sends an address (is having trouble getting the proper one), I have to mail a couple of boxes of winter clothes to him. 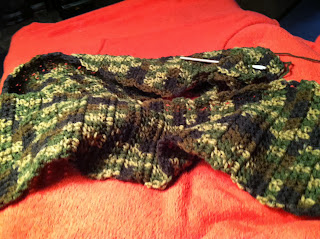 2. Several students helped me get this bulletin board up this week.  This is just the original cartoon--I didn't get a picture of the board itself.  They're easy to create--download cartoon, add it to a powerpoint (to make it larger), hook it up to the projector, put white paper on the whiteboard, and draw away.  Some people have to stop a minute to think about what this one means, but when you do get it, it's hilarious.  I'm starting poetry forms with the tenth grade, so this is perfect, and the other classes like it as well.

3. Last weekend a balloon festival was in town.  I snapped this while out and about.  The morning was perfect and the balloons were beautiful. 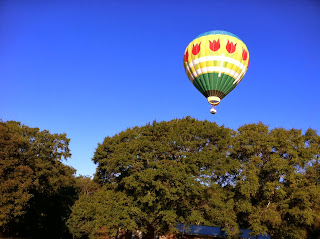 4. This link, to my friends' blog Every Tradition, is to the account of my applesauce-making experience last weekend.  These are dear friends from many years ago, and I appreciate getting to guest blog occasionally on their traditions blog. 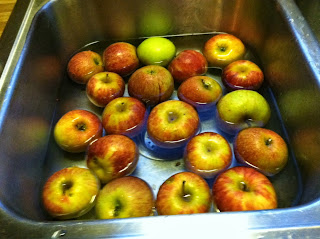 5. And finally, last but certainly not least--I am off school today!  It's a teacher workday (end of the first nine weeks), but the boss said that if our grades were in by last night, we didn't have to come in.  It's his first time running report cards on a new system, and I think he wants the peace and quiet.  That's fine with his teachers!!
Posted by Ann at 10:55 AM 3 comments:

The Beauty of Adoption

I went to a wedding last Friday night.  It was the wedding of a young man we've known since he was in K-4.  I was fine until the young man's mother came in.   That's when the waterworks started.

She is a gracious woman.  Educated--has a PhD and is the dean of the school of business at a local college.  She moved to this area when her husband took a job as plant manager of a local industry.

About twenty years ago, she went to Michigan to check on her mother, who was caring for her grandchildren  (my friend's niece and nephew).  The children's birth mother was not in the picture and the father, due to addictions, was unable to take responsibility.  My friend immediately knew that something would have to be done, as her mother was no longer able to properly care for the children--and if she didn't step in, Michigan social services would intervene.  So--she packed them all up and brought them back here.  And, in her forties, and her husband in his fifties, they adopted the children, ages 4 and 7.  Admirable.  Remarkable.

They enrolled the children in our school, which is where we got to know them.  The little boy was in my son's K-4 class.  Several times, we would bring him home with us for the afternoon, and he was delighted.  I'll never forget those big eyes and that huge, happy smile.

The children thrived under the care of their adoptive parents.  The financial sacrifice involved was huge.  The emotional investment was huge.  The sacrifice of their time, at an age when they might have been able to travel and enjoy their time alone, was huge.  They kept the children in our school, where they eventually graduated, then went on and both graduated from college also.  We stayed in touch through their school years because we exchanged school books every year, and I eventually taught both children several times as well.

Three years ago, my friend's husband died unexpectedly.  This link is where I blogged about that.  The now-grown siblings realized what an investment their adoptive father had made in their lives, and they appreciated it.

But when that young man, Jim, walked in for his wedding, and I could see him as well as his mom sitting up front, and his sister walking in as a bridesmaid--the beauty of the picture of adoption (setting them in families) and the beauty of what his adoptive parents had done for him, was beautiful to observe.

Jim is a fine young man and will be a fine husband.  His sister is married to a youth pastor.  Two young people who could have been statistics--but for the love of adoptive parents.
Posted by Ann at 1:25 PM No comments: 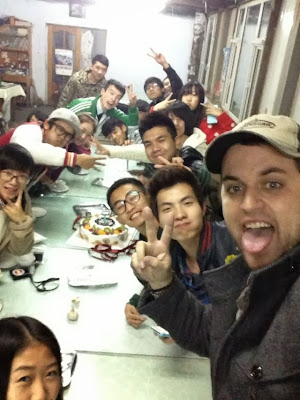 Pictures and Videos from China

Andrew, making dumplings with his students.  Looks like fun.  The second video is a continuation of the first, with a little overlap.

In front of the Imperial Palace in his city.  Apparently there are a lot of these palaces in Chinese cities, not just the ones we hear of that are so well-known in Beijing. 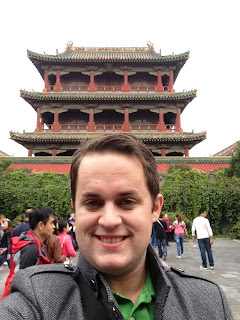 The universities are having fall break in honor of one of the great rulers (they take a lot of vacations over there!) and the English teaching team took a retreat at this location.  Sigh.  Now I'm getting a little envious.  Andrew said the retreat was extremely refreshing and inspiring.  And it certainly was at a beautiful place! 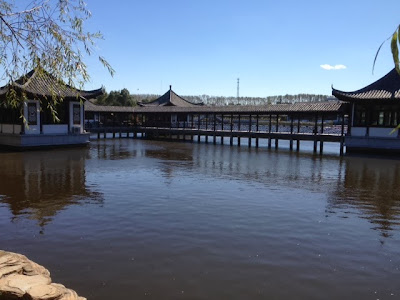 He says that he gets requests for pictures with people all the time because many times he is the first foreigner that they have ever seen.  I love this picture. 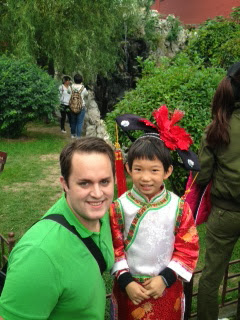 With fellow teachers on a day out. 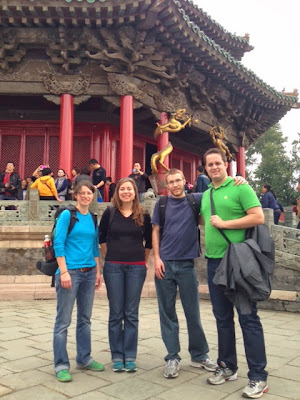 I hope readers have enjoyed the "slide show" and now have greater knowledge of what Andrew is doing and how to lift him up.
Posted by Ann at 3:48 PM 1 comment:

My friend Becka (I taught her daughter back in Greenville) has a great blog, usually featuring her good cooking and recipes.  Yesterday she had a great post for Danish Puff.  I remember Danish Puff really well, because my mom made it often.  I've made it a few times as well, and always feel like a French pastry chef when baking it.  Becka posts pictures, and the post is identical to Mom's recipe and procedure.  Brought back a lot of memories.
Posted by Ann at 7:52 PM 1 comment: