Everyone is gone today, and I am home working around the house. (Why is it so much easier to get things done when no one is home?) I've done laundry, cleaned bathrooms, vacuumed, put "stuff" away, and generally tried to get as much as possible done before going back to school next week.
And I've cooked. Got something in the crockpot for Mike's meals next week at work, browned hamburger I got this morning.
And - with a half of bag of potatoes that need to be used, a can of mushroom soup, ham chunks, onions, mushrooms, enough milk to make a good sauce, and cheese on the top--it's the perfect time to make a casserole of scalloped potatoes. Enough for several lunches for me next week as well.
Comfort food. 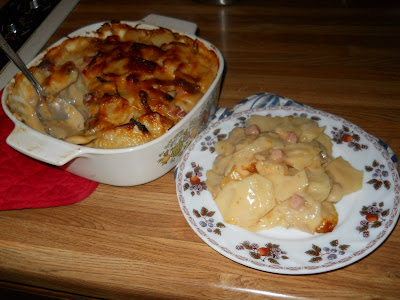 This is the picture that I posted about a month ago, which Mike has as his desktop photo, and which speaks volumes about family life - the different stages of each, the way they loved to be out with their dad doing whatever he was doing. 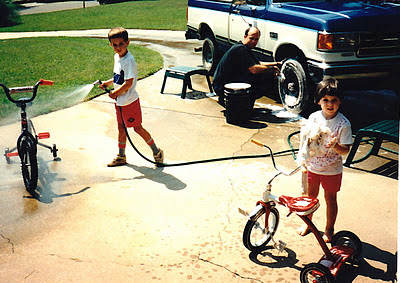 And this is the drawing that ML made of the same photograph and gave to her dad for Christmas. 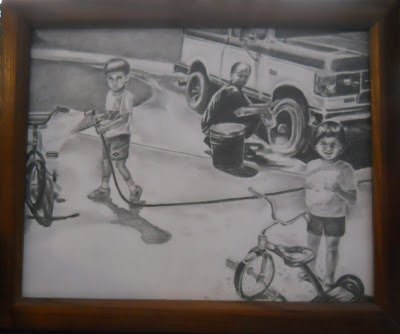 I think it's a pretty impressive piece of work!
Posted by Ann at 1:51 PM 2 comments:

Some misc. pictures of Christmas:
ML was a "nanny" for this sweet little girl the week before Christmas. One day we painted ornaments at our house. 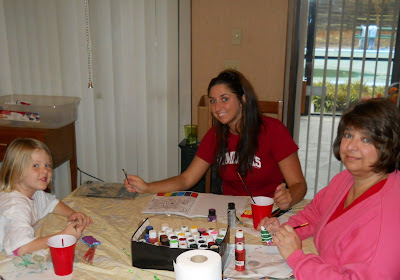 These are springerle - anise-flavored German cookies made with a special mold. My sister drove from Michigan to Illinois to get a lesson in how to make them from a dear friend of our family. Aren't they beautiful. 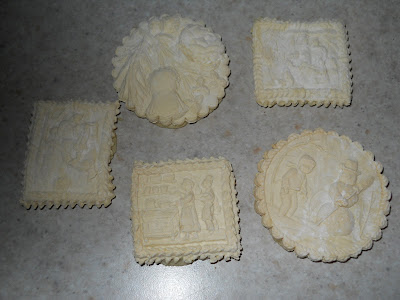 ML and Aunt Ginny, who hosted us all on Christmas eve. She had a houseful! 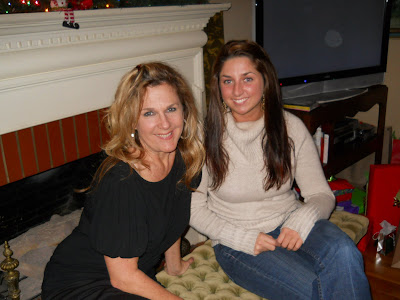 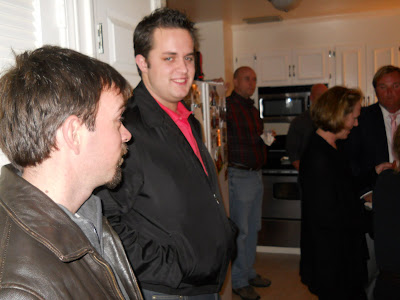 Mike and his sister Barbara. 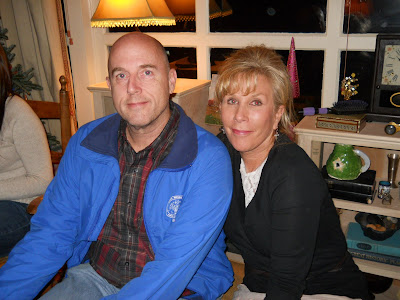 Dad and daughter on Christmas day: 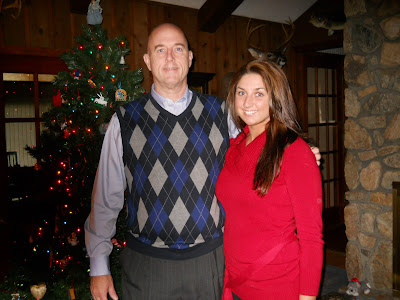 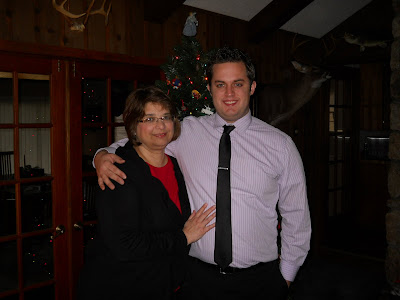 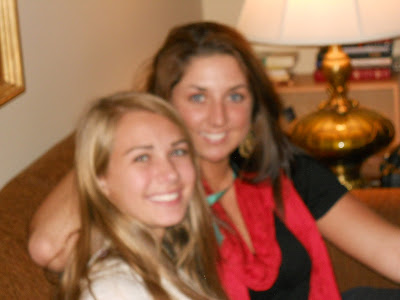 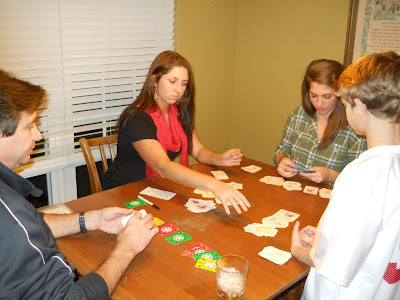 The priceless look on Dad's face when he got an iPad from my brother. 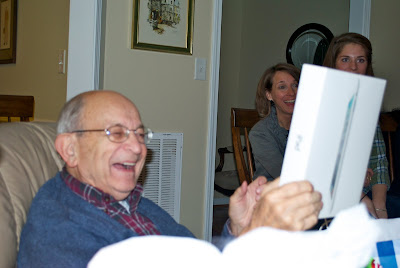 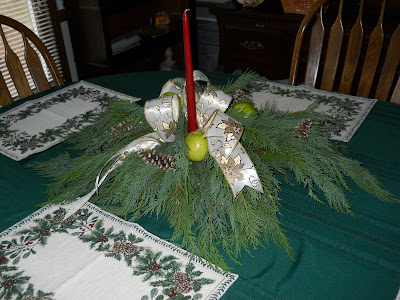 is a gift from a student's parent who is a landscaper. Isn't it pretty! The greens don't show up quite so differently in real life as they do in this picture.
Posted by Ann at 1:42 PM 1 comment:

What To Do With an Old Green Robe

Yesterday I was doing some Christmas shopping in the mall when I saw a robe - a warm, leopard print bathrobe. I am a sucker for anything leopard print. My old bathrobe is worn out. Plus, birthday money was burning a hole in my pocket, and the robe was half price. So. . .I bought it.
And now is the time for second thoughts. My mother bought me my old robe, at least twenty-five years ago. It's been so long that the exact, or even approximate, time, has faded away. She's bought me two robes since then. While they were nice, they just didn't feel like the old green one. One of them (pink and grey plaid) I gave to someone who could use it, and the other one (light green stripes) is still hanging in my closet. (Anyone need a bathrobe?) Here is the old green robe laid out on my bed. (The Christmas appearance is unintended.) 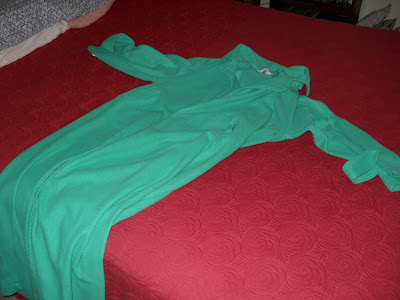 I hung the new one in my closet and brought the old one out to take to the laundry room, past Mike who was sitting in the den, and told him it was time to take the old green robe to the Haven of Rest. And that is when he dropped the bombshell.
"You're putting it in Haven of Rest? Isn't that the robe you rocked the babies in all those years?"
Ouch. He's right. How can I get rid of the old green robe? Here's proof of what he's talking about. The baby in the picture is now 23 years old. 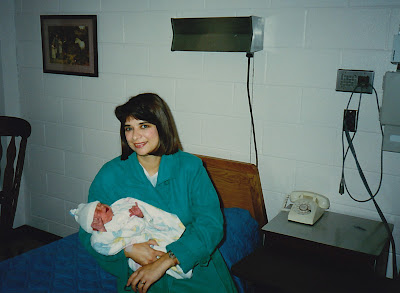 I still have the receipt for the new robe and could take it back. But the old one is worn out. The lining shows every time I wear it. What should I do with an old green robe!!!
Posted by Ann at 1:02 PM 3 comments: 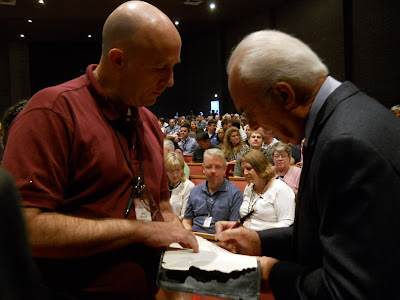 The Christmas photo (the green one) was already composed and printed, when I realized that the most important picture of the year had been left out! Here’s the story behind the little red photo that goes along with our family picture:

When Mike was 27, he realized the need of a personal relationship with Jesus Christ. Through the testimony of his brother, he accepted Christ’s gift of salvation through His death and resurrection, and asked God for forgiveness of his sins.

As a new Christian, he didn’t know much about this new relationship with Christ, but he had a deep yearning to learn more. One night he stumbled across a radio program and realized instinctively that the speaker was a true Bible teacher who could give him good instruction. For five years or so, he nightly settled at his kitchen table with his Bible, notebook, and pen in hand, to study God’s Word with John MacArthur and the Grace To You radio program. I wasn’t around in those days, but just this Thanksgiving his brother’s wife told me that they knew not to call Mike during the broadcast, as that time was not to be interrupted!

Eventually Mike got into church and systematic Christian growth, but he has always wanted to find a way to express his appreciation to John MacArthur. Last spring, Mike saw that the Grace To You organization was holding a first-ever conference, Truth Matters, just for radio listeners. We made plans to go to southern California, and my boss even let me off for three days just two weeks into the school year. We had a wonderful time, driving to the Pacific Ocean, touring the Reagan library, seeing orange groves – and most of all attending the conference. On Friday night, Mike got his opportunity to tell Dr. MacArthur thank you.

And that is the story of the red photo. 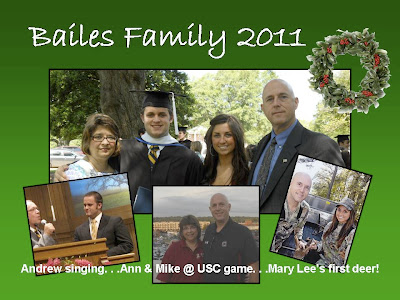 Hello to friends and family from the Bailes, still holding down the fort in Anderson, SC. Our lives do not seem to change dramatically from year to year, but that is not all bad. Stability is a gift that we may not value as much as we ought.

Mike continues as an operator at Oconee Nuclear Station. His faithful work all these years is greatly appreciated. He hasn’t hunted as much as in the past; however, he’s followed South Carolina Gamecock baseball and football with great interest. He and I got to go with good friends to a game in Columbia this fall and had a great time.

I am in my 21st year of teaching at Oakwood Christian School (32nd year overall). This year is a first – I am teaching the daughter of students who were in my classes 25+ years ago at BJJH. You didn’t think I was that old!

My folks live nearby now so we are able to spend much more time with them than in the past. They have gotten very involved at our church and are making good friends there.

Mary Lee transferred to North Greenville University this fall, and enjoys it very much. She is definitely the student in our family, and we are very proud of her hard work. She has changed her major to elementary education - her creativity will be a natural in that career choice.

Andrew had a good year, graduating from college and singing with the Calvary Quartet. He is now pursuing any musical opportunities that come his way and learning about the pluses and minuses of living on one’s own.

We send our heartfelt desire that you have a wonderful Christmas and that you find time to meditate on the gift of eternal life through Jesus, Who was sent to us during this season!

What Did The Neighbors Think?!! 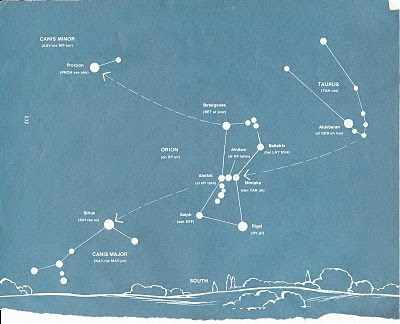 My eighth graders are really excited about seeing constellations right now. The skies are so clear, and many of them are finally putting it all together in their minds, so they come in every morning excited with what they've seen. Plus, right now Jupiter and Venus are very visible in the night sky, as well as the Pleiades very bright at this time of year. The crowning touch last night was that there was a meteor shower, the Geminids, coming from the region of the constellation Gemini which we just learned.
Anyway, our assistant pastor's son is one of the ones really doing well with this. He went out last night and tried to use a rather poor pair of binoculars (apparently one of the left lenses was completely out) to view objects in the night sky. So - his dad has a hunting rifle, and in order to magnify things, they brought that out and used the scope of the rifle as a mini telescope!
I'm just wondering what the neighbors thought when they saw the two of them sitting outside in the dark pointing a rifle toward the sky. . .
Posted by Ann at 12:14 PM No comments:

Somebody is having a birthday today. I won't say how old he is, but for comparison purposes, do you see all that dirt in the background? :-)
He has to work twelve hours today, but I hope he has a happy day anyway and that the day is not too busy there. 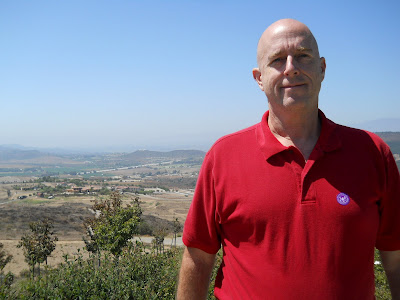 "It Would Have Saved Me a Minute or Two" 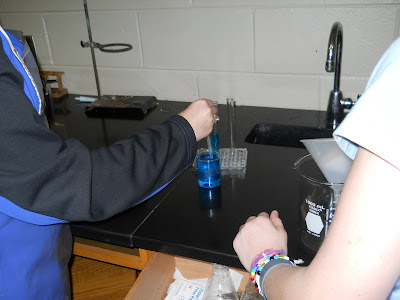 Taking high school juniors to the chemistry lab is always an interesting experience. They have legitimate questions from time to time, which I am glad to answer, but often the questions they ask are things which they really ought to think through for themselves instead of trying to get me to help them.
Today a young man says "I can't figure out how to get this last equation." Which means: "Give me a hint. Help me with it. Do my thinking for me." To which I said, "Well, then, think it through and see what the procedure tells you." A few minutes later he says "Okay, I've got it now."
So I reply "See, you didn't need me for that." And his response: "No, but it would have saved me a minute or two."
And therein lies the crux of the issue!
Posted by Ann at 3:13 PM No comments: