I voraciously read as much as possible having to do with the election. Guess it's in my K. genes.

I'm very glad the independents are breaking toward the Republicans this cycle - but have to wonder, How can someone with real moorings truly be an "independent" who might go either way? The two political philosophies are such polar opposites. It would seem that someone who has no problem switching from party to party from election to election must not have much basic grounding in core beliefs. To be pro-Obama in 2008 and anti-Obama in 2010 - or any other combination - independents must not look deeply or believe deeply. If they did they would be consistently on one side or the other.
Posted by Ann at 7:51 PM 1 comment:

In Honor of Tuesday's Upcoming Election

A major research institution (MRI) has recently announced the discovery of the heaviest chemical element yet known to science. The new element has been tentatively named Governmentium.

Since governmentium has no electrons, it is inert. However, it can be detected as it impedes every reaction with which it comes into contact. A minute amount of governmentium causes one reaction to take over four days to complete when it would normally take less than a second.

Governmentium has a normal half-life of three years; it does not decay, but instead undergoes a reorganization in which a portion of the assistant neutrons and deputy neutrons exchange places. In fact, governmentium's mass will actually increase over time, since each reorganization will cause some morons to become neutrons, forming isodopes.

This characteristic of moron-promotion leads some scientists to speculate that governmentium is formed whenever morons reach a certain quantity in concentration. This hypothetical quantity is referred to as Critical Morass.

The family whose son passed away a week ago tonight has three children older than the young man who died. One is married, with twin sons, and lives in town.

The oldest son has been away in college/med school for quite a few years. He just happens to be in town for two months, as, of all the places he could be doing rotations for his med school, he is doing them here in town at our hospital, and he's been living at home. The other person doing the same rotations just happened to have hours off where he was available to work for this man during the past week.

The daughter is teaching with us this year. She's been in China for the past eight years but felt very strongly that she was to come home this year instead. She didn't know why but she obeyed God's leading in her life.

Many family members came from Pennsylvania. Someone that knew someone that the family knew had a lake house that was available - don't know exactly how large, but with many bedrooms and bathrooms. The entire family from out of town was able to stay at this house instead of being farmed out to various people or renting motel rooms - also, on Sunday afternoon, they were all able to go out to the lake to spend time at this neutral location, which was very refreshing after the many sad hours spent in their home during the previous days.

Amazing how all those "coincidences" happened to come together for this family that has trusted in God for many years!
Posted by Ann at 9:11 PM No comments:

Memory of a Play

The young man in all these photos is Joseph. He went to be with the Lord on Wednesday night, after collapsing on the track at a nearby high school. He was in the school play last year - the last one I directed, Meet Me In St. Louis. It was his first year, even though he was a senior, but he did a fine job. He played "John," the suitor of "Rose" who was the oldest sister in the play. "Rose" (her real name is Cathy) had to get very angry with "John," and actually slap him near the end of Act I. We practiced a fake slap (Andrew was a big help with learning how to do that) because Cathy couldn't bring herself to slap Joseph. I still remember with fondness how Joseph would say to her, "It's OK. I understand. I don't mind if you slap me."
Many memories like this will come to the forefront in the coming weeks. 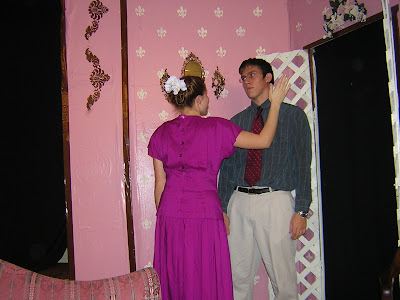 "Rose" having to slap "John" 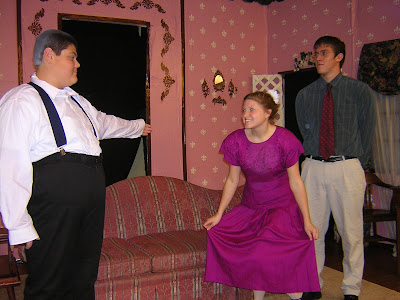 The last lines of the play, where everything is solved, and "Rose" and "John" are leaving for the World's Fair as "Grandpa" tells them goodbye. 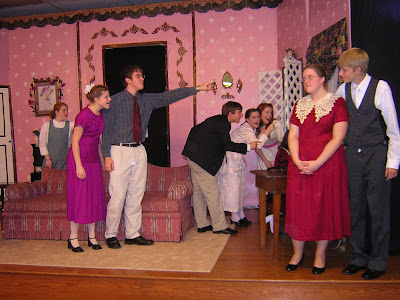 Near the end of the play (I can't get the last two pictures to swap places) - "Rose" and "John" on the left.
Many people are affected in many ways by this sad event. But those of us who worked with Joseph in the play last year have our own set of memories.
Posted by Ann at 7:59 AM 2 comments:

My Daughter the Cheerleader

Last night we went to watch ML cheer (as well as volleyball). It's a little hard to get good shots since it's night, but the lights helped. She did a great job! 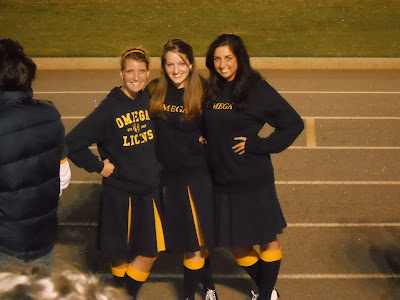 With a couple of her friends - 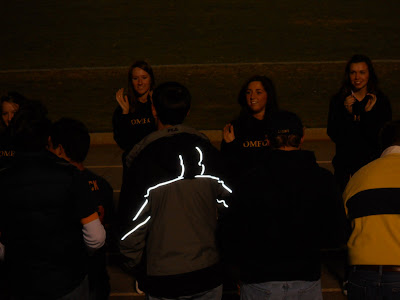 Fluorescent striping on a jacket shows up very well with a flash. . . 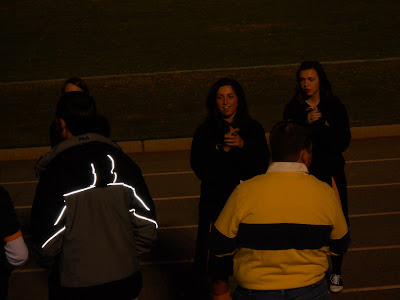 And a video clip of her in action!

I'd have loved to have gotten a longer video clip. . .but of course, the camera batteries died halfway through the game.
Posted by Ann at 8:20 PM No comments:

What a Lovely Name
Winging My Way Back Home
Posted by Ann at 1:40 PM No comments:

This was our favorite song that the quartet sang at our home church when they were there in August. This is a repeat, done as a benediction of sorts, so that is why people are standing. This is one I really wanted to be able to post.
A classic quartet song. 10/3/10 in Indiana.
Posted by Ann at 12:54 PM No comments:

Last night my friend Nancy and I drove to Greenville to watch our girls' volleyball team play Bob Jones Academy. I had to put $20 of gas in the car.
Saw Andrew briefly and left some things for ML in her dorm room (she had her own volleyball practice to go to). Of course you have to leave some $$ for college kids when you visit them on their turf.
Then Nancy and I went out to eat before coming home.
It was an expensive night.
Posted by Ann at 11:07 AM No comments:

My friend and former teaching colleague, Barbie, who is a techno-whiz, figured out how to get these files under 100 megabytes so that I can post some of them. We're going to try to get my camera to film smaller files also, in a different format, so that this won't be a problem in the future. Thank you Barbie! Only one is done right now but there may be more to follow.

Tribute to a Former Senior

Each year one of the entries my seniors put in their journals is "Being a Senior/Senior Leadership." One girl wrote an entry, including a tribute to another girl who was a senior three years ago. I'll not put in the name of the girl who wrote the journal entry, but will include the name of the girl she's talking about, for several reasons: She deserves it; she's the daughter of dear friends, and she's my birthday buddy!
"Every student dreams of the moment when he will walk down the hallway and out the front doors at LUNCHTIME! This is how being a senior is defined! I remember always looking up to the seniors and thinking that they were very mature and put together. Things always seemed more fun because the seniors were involved. When senior would pay attention to me or ask how I was doing, it had such a positive effect. Sarah C__ poured her love and time into everyone's life. She did not know how her attention to the younger people gave us an example to strive to be like. Senior year is made up of so many things and is given many expectations, but the things that are important are what we learn and give to others."
Posted by Ann at 7:46 AM No comments:

An A on my Skull!

It might sound a little unusual to the average person, but the sentence "Mom! I got an A on my skull!" means a lot when the daughter is taking Drawing Anatomy! You keep it up, ML!!!
Posted by Ann at 7:49 PM No comments: