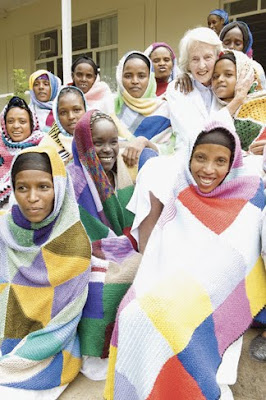 The current edition of WORLD magazine has an interesting article about two Australian doctors - husband and wife - who started a "fistula hospital" in Ethiopia around 1960. Fistula is a rarely-seen disorder in an advanced country like the U.S., but in third-world countries it is rampant. In a euphemistic nutshell, a fistula is the hole that remains in a woman who has had a difficult labor and childbirth. These women labored for days, sometimes over a week, almost always giving birth to dead babies, and being left with little control over any elimination functions - thus leading to odor problems and rejection by family and society. The article was very eye-opening to the horrible OB/GYN problems these women experience - and that we virtually never see. Over 35,000 fistulas have been repaired at this hospital. Many women can go home after the repair, but the hospital team has also built a village for those women whose problems are so bad that they can never be accepted into polite society again.

What these women wouldn't have given for good OB care, for Pitocin, for caesarean sections. I say this deliberately because there are some women in our modern, clean, fistula-free society who, usually because of a bad birth experience, have turned on OB care. While there are no doubt "bad apples" in the OB profession as much as there are in any other field, it is inaccurate to paint OB care with such a broad brush. When women do so, they are ignoring the huge greater picture - that we have some of the safest birthing care in the world. How often do we hear of babies dying in childbirth, or of mothers dying, or of fistulas? Very, very seldom.

My own son was an unexpected and difficult breech birth. I shudder to think of the possible outcome had he been a home birth. He was an initial 2 on the Apgar scale, but oxygen available in the birthing room brought him up to a 10 by the two-minute mark. Was the situation ideal? No, but he is alive, healthy, and soon to graduate from college. I may have some minor lasting results from the situation - but no fistula. The circumstances around his birth are cause for celebration, not condemnation.

I am thankful for modern medical care. If age and family weren't issues - maybe I'd go to medical school, get an OB license, and go to Ethiopia to help those women.
Posted by Ann at 7:27 AM

I've never had a baby so maybe I shouldn't comment, but for an "addled" person (see your previous post), I think you make a very compelling argument.