A Big and Exciting Day

Yesterday was a fantastic day.

About six weeks ago, a group of juniors asked me to coach them in a speech choric speaking group for our state fine arts festival.  They knew that our history/speech teacher was busy with his own speech classes, reader's theater, choric speaking, and other pieces that students were working on, and they knew that I used to do some of this.  I agreed to help them.

So we picked a piece - one that the class had done four years ago, when I was the interim coach, before our excellent and well-loved speech teacher came to us.  It's a funny piece - it's about Yankees, Southerners, and the relationship between them.  The group that did it four years ago did a good job, but they were new at choric speaking and I was too; as a result, this current group was able to watch the DVD of the first performance and then work on taking it to a new level.

We worked on it hard for about a month.  It helped to have other teachers willing to cover my study hall, or let those taking Spanish miss the first few minutes of class every afternoon (right after my English class, where we spent a little time on the speech piece most days).

When they performed for our school, two days before the competition, it was good but not great.  I had someone video it on my phone (couldn't believe the quality a phone video would be - maybe learning this iPhone isn't so bad after all) and we analyzed it later in the day.  We made some mid-course corrections, as well as having to change some things the day before when one participant couldn't go due to a death in his family.

Yesterday at 1:45 was the big moment.  Mike drove me down to Columbia so he could see it also (most years I have to ride the school bus), and what was also nice, his sister who lives there also came!  The students were so excited. The judges were having a hard time keeping from laughing too much at the funny lines.  And when one young man picked up the "flags" afterward (that the Yankees hold up in surrender as they go to the Southern side), one of the judges leaned over her table and said "Perfect!" to him.

But then they really got worked up when the man who coordinates the Showcase came down to the judges right after their performance and said to the hostess, "Now what was the name of this group?"  Which meant that the next hour was filled with anxious wondering if they would be included in the Showcase,  six of the best performances of the day (speech and music categories combined, about 25-30 categories in all) that re-perform their pieces at the end of the day between each section of handing out ribbons and awards.

Well, to their excited amazement, they not only got named to Showcase, but they were the last piece on the program.

And, when the time came, they stole the show.  It was hilarious.  Their timing was perfect and their personalities really showed through.

And in the end - they not only went to Showcase, they also got first place in their category, and get to go to the Nationals competition next month.  Here is this excited group of juniors right after the awards ceremony/Showcase.  Yanks in blue on the left; Southerners in gray on the right. 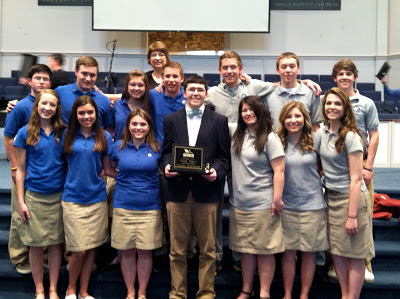 And, below, they are showing the "arguing" of the two sides.  One thing that I learned through this - The practices were sometimes frustrating, because there were fifteen chiefs in this group and no Indians.  Everybody had an opinion, everybody knew how it should be done, and they were not easily settled down.  However, fortunately, most of their opinions worked and were worth incorporating.

With a group like this - so full of energy that just needs to be channeled - when they do get their chance to shine, they come through magnificently.  They surely did yesterday.  Great memories of a great day. 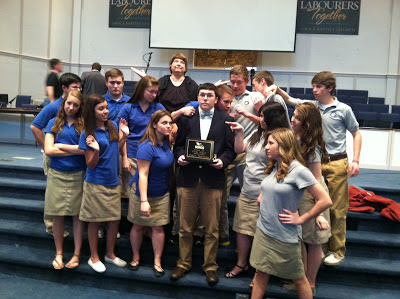 Sounds like a rewarding end in many ways! Love your expression in the last photo!