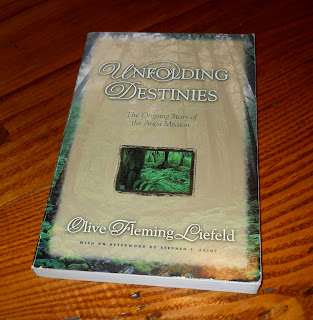 Earlier this summer I read Unfolding Destinies by Olive Fleming Liefeld, who was the widow of Pete Fleming, one of the lesser-known of the five missionaries killed in Ecuador in 1956, of whom Jim Elliot was the most famous.  I enjoyed it for three reasons.

First of all, she gave good detail about their lives and that time period; also about the process that the men went through deciding to go to Ecuador in the first place, and then to attempt to meet the Aucas.

Secondly, I was surprised by the realism of the book.  So many things about these missionaries have been written over the years that they are larger than life figures.  But nobody is above dealing with a sinful nature, issues of pride, hurting other people at times.  This book was written realistically and was thus refreshing to read.

And finally, the foreward of the book explored some of the aftermath of the grief process that these families were left to deal with after the death of the five missionaries.  It is worthy of contemplating today, about any tragedy.  Olive's second husband wrote this, starting on p. 11:

“During the course of our life together Olive and I have often struggled with the question of why it happened that five young men—strong, and gifted, each needed in another part of the missionary endeavor, each married, each (except Pete) a father—were allowed to die.  Olive clung to the belief that God had prepared her for it, but had He prepared the events themselves?  Was it all evil and the work of demons or the Devil?  Was it an unfortunate tragedy?  Did God do it deliberately?

“Many have attempted to justify what happened by the results.  Do the scores or hundreds of people who were inspired to consider becoming missionaries justify it?  Do the hundreds of Aucas who became Christians explain its purpose?  Does the abandonment of mutual killing among the Aucas (except for a remote group still in darkness) warrant the loss?  How about the fact that all of the killers became believers and that three of them are now pastors and evangelists?  Does any of this say to us, ‘THIS is why it happened’?  If so, then the next question is: Was the infinitely wise and powerful God unable to find a way other than to sacrifice the lives of such men as these, and five of them at that?  All such talk about this subject is, of course, hindsight.

“Bring in the theologians and the philosophers.  Let them sit with grieving widows and philosophize about whether God causes, contributes, allows, redirects, or whatever.  Is God’s will cold or loving?  Is His will impersonal fate or personal care?  Hidden or understandable?  To be feared or embraced?

“Grief-stricken people are often ‘comforted’ with a Bible verse popularly known by its reference, Romans 8:28: ‘We know that all things work together for good for those who love God, who are called according to his purpose.’  I put comforted in quotes because the verse is sometimes quoted mechanically or insensitively, and sometimes as a substitute for personal deeds of comfort.  Some think a grieving person only needs to apprehend a theological truth.  The message some think that the verse conveys is that we should welcome evil or that evil always comes from God and is intended to accomplish some hidden purpose.

“The verse, of course, does not say that.  Nor does it say, on the contrary, that all things are good.  It does not say that everything is directly caused by God.  The Bible, in fact, calls death an ‘enemy’ (I Corinthians 15:26) and says that Christ died to destroy the Devil, ‘who has the power of death’ (Hebrews 2:14).  What Romans 8:28 does communicate is the truth that God can take all things – even bad ones – and bring good from them for those who love Him.  It teaches that God acts purposefully in calling us to faith in Him.  It reflects a loving God.”
Posted by Ann at 8:44 AM

I remember reading in something of EE's (wish I could remember where) that though there were multitudes of results of the five men's deaths, none of it was anything that couldn't have been accomplished without their deaths (people saved, called to preach, called to a closer walk with God, etc.), so it still didn't satisfy the "Why did it have to be this way?" questions. But it all comes back to faith, to trusting in what we know from the Bible of God's character even though we don't understand His ways.

It's been years since I read this: I need to read it again some time.